The Institute for Social Aesthetics and Mental Health is an interfaculty institute at Sigmund Freud University (SFU) for students of psychotherapy science, psychology, health sciences, medicine and jurisprudence, and is directly subordinate to the rectorate.
Research and teaching activities at the institute focus on social aesthetics in general and on the link with mental health in particular. Social aesthetics is a discipline that belongs to the human sciences and which developed from the Aesthetics of Everyday Life (Light & Smith 2005*) and New Ecological Aesthetics (Böhme 1995*). In accordance with the WHO definition published in 1947 mental health is understood not merely as the absence of mental illness, but as a state of complete mental well-being in which an individual is able to live a largely self-determined and autonomous life that is experienced as joyful (Musalek 2013*).

The main tasks of the Institute for Social Aesthetics and Mental Health are therefore the study and teaching of concepts and models of mental health as well as practical possibilities for achieving it from a social aesthetics perspective, whereby social aesthetics in this context goes far beyond superficial aspects of beauty and attractiveness to embrace all areas in which depth-aesthetics (Welsch 1996*) are involved with achieving and maintaining mental health (“aesthetics beyond aesthetics”).

Social aesthetics (Berleant 2005) is an aesthetics of the social situation as it is lived and experienced. Thus as a form of aesthetics that is always contextual, it emerged from the aesthetics of everyday life (Light & Smith 2005), which in turn sees itself as environmental aesthetics (Berleant 1992) or ecological aesthetics (Böhme 2001) and in many areas overlaps with modern phenomenological aesthetics (Sepp & Embree 2010). Interest here is no longer centred on the use and utility of what is given to us in everyday life but rather on the many aspects of the beauty that surrounds us and that is in front of us with all its positive and negative effects on us as human beings ranging from the admirable and the sublime to the despicable and the detestable. Man is perceived as a social being that constitutes and manifests itself in in-being with the Other. As humans we are always and everywhere social beings, so the question no longer arises as to whether we live socially but rather how we live socially. (Musalek & Poltrum 2011). This question of the How – how we experience and structure our life together – determines the core field of work and research in social aesthetics. Within the meaning of aisthesis, social aesthetics research attempts to illuminate and to understand the way in which we live together, the forms and possibilities for organising human cohabitation and the way they impact on our sensorium and on our abilities to aesthetically experience and perceive the world around us. As such it seeks to facilitate the basis for the beneficial development of the individual in our community and the further development of human cohabitation in general.

The WHO defines health as a state of complete physical, mental and social well-being and not merely the absence of disease or infirmity (WHO 1947). As illness today is generally understood as a dysfunction or functional impairment, mental well-being cannot be reduced solely to the functioning in mental partial areas, which raises the question as to when mental health in the sense of mental well-being is achieved. The WHO (2013) defines mental health as a state of well-being in which an individual realises his or her own potential, can cope with the normal stresses of life, can work productively and fruitfully, and is able to make a contribution to his or her community. In this context Whitbeck (1981) defines health as the ability or capacity to act or participate autonomously in a wide range of activities. This ability to act autonomously is synonymous with what Gernot Böhme (2012) understands by a self-determined life: the individual has the ability to act, respond and to construct their own condition in the circumstances in which they find themselves. Nordenfeldt (1992) goes beyond Whitbeck’s idea of autonomy when he says that it is not about the ability or capability to act but also the ability to set vital goals. For him, these vital goals are all states which are necessary for an individual to achieve a basic level of happiness. It thus becomes clear that we can talk of mental health when a state has been achieved in which the individual is able to live a largely self-determined and autonomous life that is experienced as joyful. (Musalek 2013).

Defining the Institute for Social Aesthetics and Mental Health

Work at the Institute for Social Aesthetics and Mental Health therefore focuses upon all those fields of research and teaching that are located at the interface of social aesthetics and mental health research or areas where these overlap. As an interdisciplinary research institute and university teaching institution, the Institute for Social Aesthetics focuses on all those aesthetic aspects, foundations and dimensions of the health sciences – in particular medicine, psychology and psychotherapy – that constitute an indispensable knowledge base for developing a human-based medicine. The Hows of dealing with life and with our fellow human beings is the main focus of scientific endeavour and teaching activities at the institute. This knowledge about the How of our social coexistence in general and in preventative and curative medicine in particular provides the indispensable social aesthetics foundation for human-based and human-focused therapeutic interventions in which the individual once more becomes the measure of all things and activities.
European intellectual history teaches us that beauty is not just an adornment to life but is also a major source of strength for our life (Musalek & Poltrum 2011). Moreover, the positive aesthetic experience also has healing power. That beauty is a highly effective antidote to life’s suffering, i.e. acts as an anti-depressant, has been documented in the tradition of philosophical aesthetics from Plato to Adorno. Social aesthetics that wishes also to be understood as the science of beauty in interpersonal relationships provides us with knowledge that in medical-therapeutic practice becomes a key pillar of human-centred approaches to prevention and treatment. Subject matter that the institute studies, empirically evaluates, teaches and implements in clinical practice includes, for example cultivating patient contacts and interactions, the deconstruction of the boundaries of interaction, the creation of atmospheres that are free of fear and conducive to health, bringing humanity into empty patient rituals, raising awareness for the perception and experience of beauty and the opening up of aesthetic future perspectives for the healthy as a means of disease prevention and for the sick as a means of supporting treatment.
The chief areas of interest in social aesthetic mental health research in the field of disease prevention and (early) diagnosis are the style of initial contact with the patient, the paraverbality of exploration, the elegance of diagnostics, narratives vs. truth, meanings/myths/stigmata, aspects of the temporality (chronos/kairos) of the disorders, possibilities/impossibilities of the individual (utopos) as well as masks and portraits, etc. and, in the area of treatment, the attractiveness of treatment forms, (social-)aesthetic therapy goals, the attractiveness and beauty of life, attentiveness/mindfulness, autonomy/self-care/self-determination, cosmopoiesis – cosmopoetics, etc.

The broadening of human scientific approaches to the sick and their suffering has made it necessary to find new research methods and scientific ways of exploring the subject. In his book of the same name published in 2003, the philosopher Wolfgang Welsch coined the term aesthetic thinking for one of these new types of thought. This way of thinking stands in stark contrast to “computational thinking” (“rechnendes Denken” – M. Heidegger, 1927, Sein und Zeit), i.e. the form of thought, which still shapes medical discourse today. The term “computational thinking” was coined and critically deconstructed by Martin Heidegger (cf. Poltrum 2005).

Today, however, going beyond Heidegger’s definition, calculative thinking is understood to be an essentially cognitive approach to the world, the first step of which is based on the observation (i.e. on sensory perception or technically enhanced sensory perception) of natural events and circumstances. In a second step, these observations are then transformed into figures in a “measurement process”. The figures obtained in this manner are the starting point for the “calculations” that form the third stage of calculative thinking, whereby these “calculations” today are essentially limited to probability analyses. In a fourth step, the “significances” are interpreted by the investigator, and it is not uncommon for speculations that go far beyond the numerical results to be passed off as a scientific discussion of “objective calculations”. In turn, these speculations serve as the starting point for new “series of observations or experiments”.

In contrast to this, in “aesthetic thinking” sensory perception does not form the sole basis for scientific interpretation. Describing the unique characteristics of man as a zoon logon echon, Aristotle pointed out that the human person is characterised not just by his reason, but above all by an inborn aisthesis or perception. This human aisthesis cannot be reduced to a mere animalistic-emotional feeling, it is a deeply human-emotional approach to knowing and understanding the world. As a special means of the capability to experience, it is also a fundamental basis for aesthetic thinking. In a further step, aesthetic thought is shaped by a “generalised imaginative interpretation” (“aesthetic-imaginative expansion”), as Wolfgang Welsch put it in the work referred to above. This in turn is the starting point and basis for the reflective exploration and examination of what one perceives in the third step. The consolidation of the perception that has been reflectively substantiated in this way to a “phenomenological overall view” then takes place in the fourth stage, which is guided not just by a love of truth, but above all by integrity (“Redlichkeit” – Nietzsche, Die fröhliche Wissenschaft).

In The Gay Science, Nietzsche drew attention to the central role of integrity and truthfulness in the study of our world. He set this against the arrogant and ultimately unrealistic aspiration of the scientific investigator, who remains bound by the conviction that it is possible for people to recognise the objective truth of nature. However, such an ultimate universal truth will always remain inaccessible to us as human beings; even a mathematical artistry that pretends objectivity will not make it possible for us to “find the truth”. In place of a “truth gain” that is dogmatically demanded but can never be achieved, what is needed in research is a love of truth that is manifested in honesty and truthfulness. A love of truth in place of the love of probability that is so prevalent today also enables us to open up new dimensions of understanding of the world.

From this perspective, aesthetic thinking that is based on a love of truth and “Redlichkeit” can only enrich our medical understanding. Aesthetic thinking becomes an indispensable method everywhere that questions not just about the What of something (e.g. what must I do therapeutically?) but also and above all about the How (e.g. How must I structure the initial contact?) have to be asked and answered, i.e. everywhere that we enter the field of medical social aesthetics. Thus questions such as how to create atmospheres that are free of fear and conducive to health in diagnostic and treatment facilities or questions concerning the development of differentiated forms of meeting the stranger in hospitality, cannot be meaningfully answered without aesthetic thinking.

Aesthetic thinking should not therefore, despite all methodological differences to computational thinking, be seen as its alternative. On the contrary, it is a complementary form of thought that permits a broadening of understanding the world. In any case – whether one approaches the other and their problems with computational thinking or aesthetic thinking (or with another established form of thought) – what is needed in research is integrity and truthfulness instead of an ideology of objectivity.

The Institute for Social Aesthetics and Mental Health offers lectures at SFU Berlin and Vienna, as well as internships in Vienna, supervision of Bachelor’s and Master’s theses and the Salon philosophique event series.

Internships: In cooperation with the Anton Proksch Institute 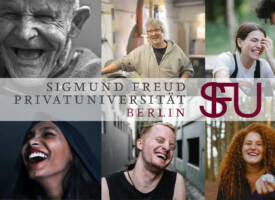